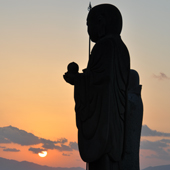 Then “man on the street” interviews begin to be filed, as NHK crews manage to get communications established with their studio command center. One reporter has encamped at Shinjuku Station, where, over the next several hours, he files reports on the status of the Yamanote Line (Tokyo’s inner loop that serves millions of riders each day) and JR East’s suburban lines. Another reporter calls in from Lawson’s and AM-PM convenience stores, where shelves were emptied of batteries, cup-a-noodles, and bottled drinks within the first couple of hours. Another has filed reports from outside a major hub – was it Shibuya or Hamamatsucho or Akihabara? it could have been any of them (and probably was all of them) – showing a taxi stand with no taxis and a bus terminal with empty bays, and thousands of commuters waiting in lines that snaked around the block. Another has filed reports on the complete gridlock that occurred on the roadways, both major and minor, as movement in any direction was blocked when everyone simultaneously attempted to exit Tokyo’s commercial, government and business districts. Then as daylight faded, and the stranded sized up their options, sales clerks and white-collar salary-men began walking, with or without flashlights, to their suburban homes an unknown number of hours away. Those who weren’t fit enough for such an adventure began their long wait in public spaces, on chairs, on the floor, or in opened rail cars. In some places, first-response coordinators handed out small emergency care boxes containing water and snack food and blankets.